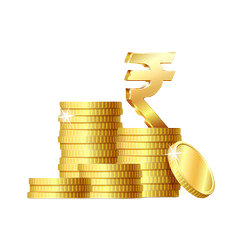 After days of incessant sell-offs, the Indian rupee opened higher against the US dollar on Monday amid positive domestic equities, a weakening dollar in overseas markets and an interest rate hike in the upcoming European Central Bank or ECB monetary European Central Bank meeting later this week.

The rupee opened at 79.76 against the US dollar on Monday, hitting an intraday high of 79.72 and was seen trading at 79.87/$1 at the time of writing, nearing the key psychological level of 80/$1 but lower than the lifetime low recorded last week. Equity benchmark indices Nifty 50 and Sensex surged over 1% each in the session, providing support to the domestic currency while rising oil prices capped gains.

Brent crude jumped 2.7% to $103.9/barrel and WTI Futuress surged to $97.03/barrel as markets awaited the gas flow resumption from Russia to Germany via the Nord Stream pipe. The US dollar index dropped 0.22% to 107.8 levels on speculations of a higher interest rate hike to be announced by the ECB in its monetary policy meeting on July 21, 2022, which would pull the index lower, helping INR to ascend in the session.